She was born in 1966 in Massa Carrara and she’s currently living near the Apuan Alps, in the coastal area of Versilia. In the last twenty years she’s been exclusively committing herself to art. She’s been devoting her time to regular studies in this field, side by side with distinguished Masters, attending at Fine Arts Schools. She made her debut on occasion of MARGUTTIANA cultural gathering at RONCHI, a hamlet by the sea in the town of Massa distric. Her first cycle of personal exhibitions took place in the premises of “Villa Chiff Giorgini”, then at “Villa Cuturi” and, last but non least, in the facility of “Casa Museo Ugo Guidi”. Those were the years of the first public honours she was awarded. One painting on canvas in particular is worth mentioning; it is actually being exhibited at the picture gallery of Forte dei Marmi Museum and was the recipient of an award on occasion of the “European Heritage Days” (“Giornate Europee del Patrimonio”) and of the “Days of Contemporary Art”, whose cycles of cultural initiatives were planned and carried out by MIBACT (Italian Ministry of Cultural Heritage and Activities).

Over the same period she’s been dedicating herself to a personal intimate exploration of diverse expressive modalities, suitable to convey emotional meanings and contents. This pursuit consisted in a thorough research into the phenomenology of colours and their connection with inner feelings. This quest lead to the unique style of the artist’s graphical representaions, inspired on the one hand by the seeming haphazardness of Action painting and related, on the other hand, to some aspects of the figurative trend; by means of the latter modality, the artist’s piece of arts echo the natural stark cotrasts which specifically define natural landscapes of her homeland.

In 2011 Pontremoli municipality administration selected Maria Rita Vita among the community of her peers, and reserved the local “Salone dei 400” for a personal exhibition of her works, an event that was included in the “Premio Nazionale Bancarella”, a high-profile yearly cultural fair hosted in that municipality. The official opening of the artis’s personal atélier in the historic town centre of Massa dates back to the same year, an event that set the stage for the artist’s adherence to the new language in design, with a particular reference to fashion garments and clothes; a similar breakthrough into a new professional period was experienced by other Masters of Contemporary art, as well (from the year 2014 on, many fashion items by the artist were certified by “Vita” trademark; their stylistc motifs are drawn directly from her pictures and other personal limited-editions creations. Some fancy materials she uses are from “Maestri Artigiani Comaschi” production). Items pertaining to the design sector include pictorial covers for novels, such as “Omicidio dell’Anima” by Giancarlo Perazzini and, in 2017, “Scheggie di memoria”, a piece of “rosenoir” literary genre by Isabella Pileri.

Among all collective and personal ehibits featiurng her works, the most noteworthy are “Emozioni sulla Cisa” (Emotions on Cisa pass), which took place in the area of Berceto municipality, and “On the road”, with the sponsorship of F.I.M.A. (Italian Federation of Art Dealers). The latter exhibition is a gathering of rare and prestigious paintings (numbering even works by Nero di Bicci, by the Leonardesque painters Cesare da Sesto and Bernardino Luini, by the Michelangelesque Jacopino del Conte, along with works by Guido Reni, Alessandro Tiarini and by the “majestic” Pietro Paolo Raggi).

At the invitation of A.s.a.r.t. (Association of Sculptors and Artists from Pietrasanta), Maria Rita Vita takes part to those meetings of its Management Board which adress charitable initiatives; this is a further recognition of credits that adds human value to the artist personal growth.

In 2015 Maria Rita Vita was selected and invited to exhibit her art at the TENTH BIENNIAL FESTIVAL OF ROME, at the facility which previously hosted “Firenze Arte EXPO”. She took part, some time later on, to a collective exhibition staged to the memory of Antonello da Messina, in the premisises of “Museo Mandralisca”, in Palermo, where a wooden altarpiece of hers is still being displayed to date. The next event dedicated to her works was an exhibition in Florence, at “Donatello Gallery”. On that occasion, Maria Rita Vita garnered remarkable appreciation, being selected as the Italian delegate at the Biennial show in the Polish town of Zamosc.

Furthermore, in the same year, tha artist earned a critic mention which lead her works to be featured in the “Giorgio Mondadori” Contemporary Art Catalogue, an item from “Bolaffi” catalogues edition. In 2016 the artist got back to her homeland, and, as a pioneer in locations described below, she was the first artist to stage a personal works exhibit in the venue of “Cava Ravaccione di Fantiscritti”, a marble quarry on the Apuan Alps. On that occasion the quarry artificial chasm, cut through into the mountain, down to its underground bowels, hosted her works – oil and acrylic paintings, resins-based and mixed-media pieces of arts – realized with the employ of marble sawdust, the core constituent of the artist’s primigenial “sculpted paintings”.

In 2017 Maria Rita Vita launched her first nation-wide exhibit tour “Metafore di Vita”, hand in hand with the new curator of her activity, Luisa Pavesio, previously appointed Managing Director of Italian Culture Intitutes. A significant amount of works from her production was also exhibited, in April 2017, at the Roman “Foreign Countries Society”, introduced by a presentation of the Art critic Lorenzo Canova. The critic himself, together with Maurizio Calvesi, is co-curator of the Contemporary Art collection at Farnesina, besides being a counsil member at “Fondazione de Chirico”. Included into the elegant Catalogue published by “Editori Riuniti di Bergamo”, a noteworthy detailed critical comment by Ambassador Umberto Vattani can be read. Vattani is himself both a diplomat and learned collector of prestigious items. He is also the founder of the aforementioned Contemporary Art Collection at Farnesina facilities, and of that which is hosted at “Foreign Countries Society”, as well. Tha latter is currently exhibiting masterpieces of sculpture and painting by the most renowned Masters of Contemporary Art.

Further stages of Maria Rita Vita tour were at Palazzo Robellini, in Aqui Terme, sponsored by the townhall administration, and at Sanremo Casino (thanks to the collaboration of the Art critic Federica Flore and of the Art gallery manager Marzia Taruffi); the last stage was in Genoa, at the city Naval Museum.

In the course of 2017 the artist has been committing herself to the remarkable realization of several unique pieces in the design sector, too. To name a few, we mention garments like the ties she designed for AAT- Ltd Company (Agroindustry Advanced Technologies), pieces of furniture of the “Art-Edil-arredo” series and, last but not least, her productions in decorate glass.

In 2018, the artists’ tour of exhibitions get to its final stage in Collodi, in the natural setting of “Giardini Garzoni”, at the invitation of “Pinocchio Foundation” President, Pierfrancesco Bernacchi. Given this last stage significant success, confirmed by an enthusiastic public turnout, the Foundation administration consented to hosting a second edition in March 2019. A possible stage abroad in Berlin is currently being planned.

Aside from the previously mentioned prominent scholars and experts, critics and comments on Maria Rita Vita art have been issued also by Enrico Bertero, past mayor of Acqui Terme, Giancarlo Prestinoni, Managing Director of Sanremo Casino, and Maria Paola Profumo, President of “Mediterranean Maritime Museums Association” and past President of “Martime Museum of Migrations in Genoa”. Several columns have dealt with Maria Rita Vita works, syndicated both in local and statewide cirulating newspapers, as: La Nazione, Arte, La Toscana, Inews Swiss, Il Tirreno, Il Secolo XIX, not to mention interviews broadcast by the local tv channels “Antenna 3” and “Toscana TV”. 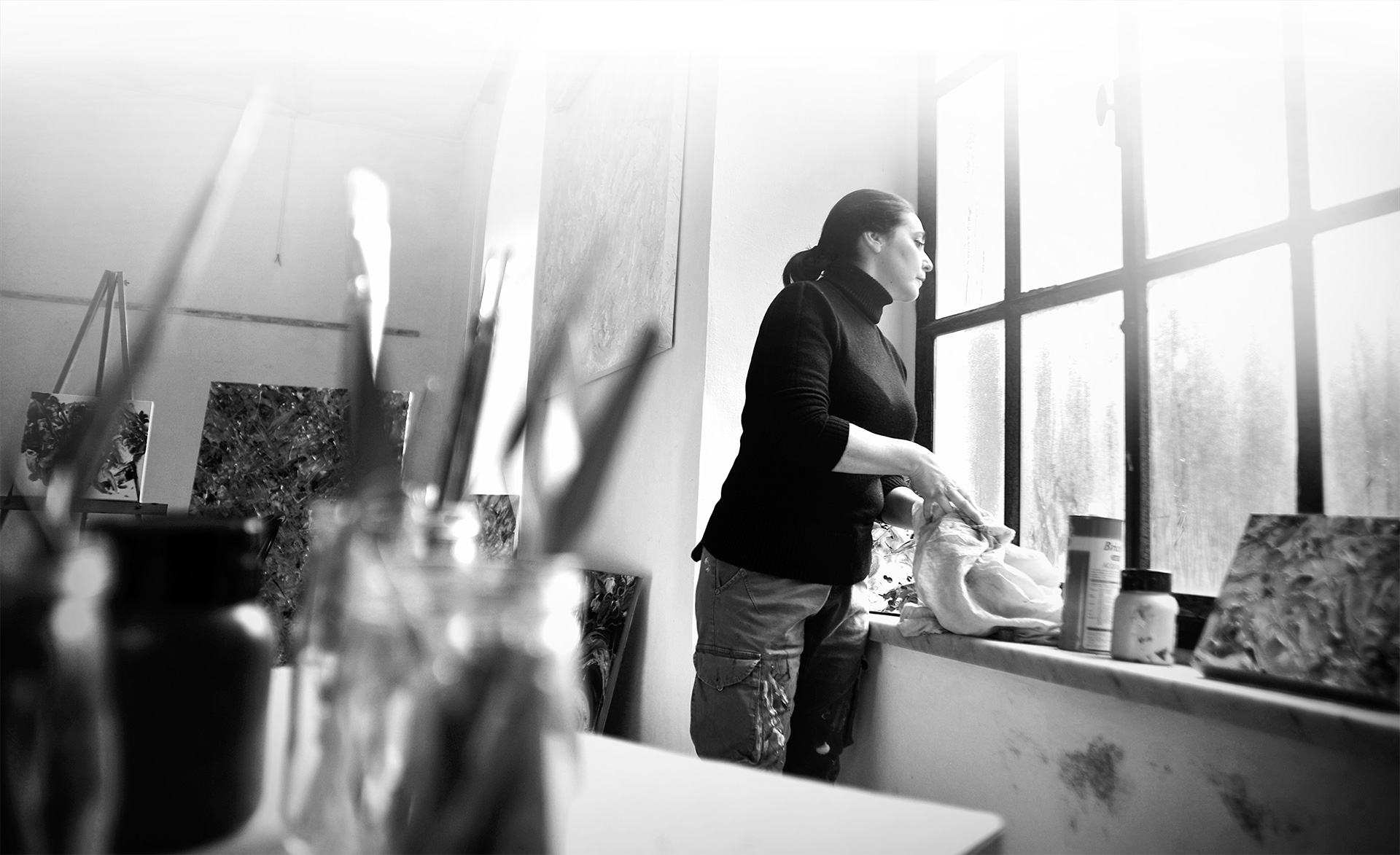